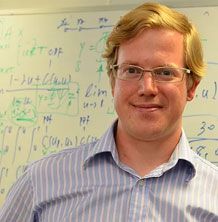 Dr. Justin Dauwels is an Associate Professor of the School of Electrical and Electronic Engineering at the Nanyang Technological University (NTU) in Singapore. He also serves as Deputy Director of the ST Engineering – NTU corporate lab, which comprises 100+ PhD students, research staff and engineers, developing novel autonomous systems for airport operations and transportation.

His research interests are in data analytics with applications to intelligent transportation systems, autonomous systems, and analysis of human behaviour and physiology. He obtained his PhD degree in electrical engineering at the Swiss Polytechnical Institute of Technology (ETH) in Zurich in December 2005. Moreover, he was a postdoctoral fellow at the RIKEN Brain Science Institute (2006-2007) and a research scientist at the Massachusetts Institute of Technology (2008-2010). He has been a JSPS postdoctoral fellow (2007), a BAEF fellow (2008), a Henri-Benedictus Fellow of the King Baudouin Foundation (2008), and a JSPS invited fellow (2010, 2011).

His research on intelligent transportation systems has been featured by the BBC, Straits Times, Lianhe Zaobao, Channel 5, and numerous technology websites. Besides his academic efforts, the team of Dr. Justin Dauwels also collaborates intensely with local start-ups, SMEs, and agencies, in addition to MNCs, in the field of data-driven transportation, logistics, and medical data analytics.